By mapping a sample of Project Implicit's publicly-available data for the Race Implicit Association Test, we can start to see how U.S. counties vary in their implicit racial attitudes: 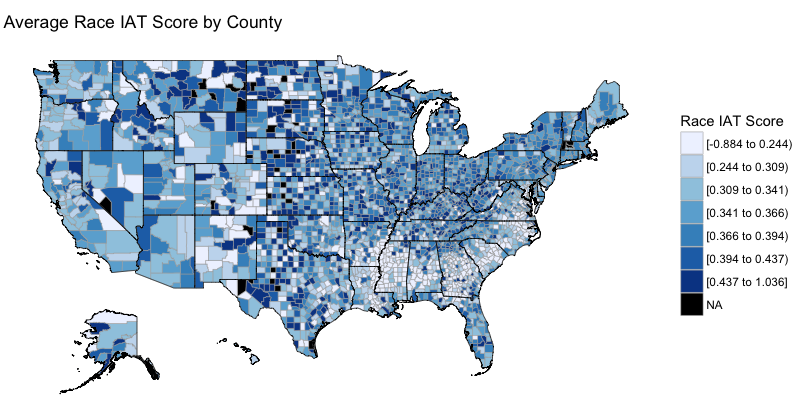 By mapping data by county rather than state, we get a finer-grained picture of geographic variation than averages that cover large areas such as states (as mapped here. However, as a result, these maps can be misleading or less useful when data is missing for many areas (as indicated by counties colored black, listed as "NA" in the map legend/key).

Data and code used to create this map (and a state-level version) can be found here.

Project Implicit's data is an excellent resource for projects from the undergraduate or training level to publication in top-tier journals (e.g., Sawyer & Gampa, 2018). Access the data and codebooks here.

• Training/classroom use
The datasets include a wide variety of variables, including categorical demographics, likert-type items, reaction-time responses, making them convenient for student projects and teaching statistical concepts like hypothesis testing and variable distributions.

• Publishing using implicit association test (IAT) data
Looking at trends in implicit association test (IAT) data over time, and how those trends relate to historical events, lends insight into psychological processes in attitudes and stereotyping, all at no cost. The data also includes variables related to explicit attitudes, political ideologies, and participant demographics.

Other data that could potentially be linked to Project Implicit data include that released by:
the Federal Elections Commission
the U.S. Census
FiveThirtyEight
the Bureau of justice statistics (e.g., crime victimization)
the Michigan Population Studies Center (e.g., segregation indices for large metro areas)
Data.gov
the General Social Survey (data on Americans from 1972-2012)

Two decades ago, when Mahzarin Banaji, Tony Greenwald, and Brian Nosek first developed the Implicit Association Test, it was a radical idea--that people’s minds might hold associations or biases that they could not recall or report--and it was unclear what this idea might mean for society.

Today, implicit bias has captured the attention of researchers, businesses, journalists, and millions of visitors at Project Implicit. Last week, during a ceremony at the Library of Congress, the Banaji, Greenwald and Nosek were awarded the prestigious Golden Goose Award from the from the American Association for the Advancement of Science, recognizing their work as a major breakthrough with exceptional social impact.

You can take the Sexuality and Age IATs, and get personal feedback on your implicit preferences, here.

You can take the Race and Gender IATs, and get personal feedback on your implicit preferences, here.

Mahzarin Banaji, a Harvard University psychology professor and one of the original founders of Project Implicit, was recently featured in a short video by The Washington Post about trainings seeking to reduce implicit bias. Click here to watch the video, "Can You Change Implicit Bias?"

Since its founding in 1998, more than 20 million people have completed studies at the Project Implicit websites. Starting in 2014, Project Implicit has made the data from the demonstration site freely available for researchers, journalists, educators, and others who want to use it. Click here to read more

May 24, 2018: How Implicit Attitudes Relate to Beliefs About Multiculturalism and Colorblindness

A recent meta-analysis examined how implicit and explicit attitudes relate to the ideas of multiculturalism and colorblindness. Click here to read more

May 7, 2018: Investigating Changes in Racial Attitudes During the Black Lives Matter Movement

A recent paper published in the journal Alcohol and Alcoholism used data collected at the Project Implicit Mental Health site to examine how implicit attitudes about drinking related to drinking behavior. Click here to read more

What are common reactions to reading about the Implicit Association Test (IAT) in the popular press? How might reactions to media stories about the IAT shape conceptions of implicit bias more generally? These questions were recently explored in a paper published in the British Journal of Social Psychology by Jeffrey Yen of the University of Guelph and colleagues. Click here to read more

A recent article published by the Association for Psychological Science (APS) highlights some of the different research applications of the IAT since its creation 20 years ago. Click here to read more

The Christian Science Monitor recently released a video on the IAT and the notion of implicit bias. Click here to watch the video

January 25, 2018: How Confrontation of Biased Behavior Changes Attitudes and Behavior

Laura Parker, of Purdue University, recently published a series of studies in the Journal of Experimental Social Psychology in which she and her colleagues examined what happens when people are made aware if their biased decision-making. They wanted to know whether confronting people with their biased behavior is enough to change their attitudes, or whether it will cause people to become defensive and dismiss the feedback. Click here to read more

December 2, 2017: The Development of Implicit Attitudes in Children

How might people better recognize their implicit biases? Can an educational session effectively alter awareness of implicit bias and motivations to address them in judgment and behavior? Project Implicit, in collaboration with the University of Virginia, is currently investigating these questions with an implicit bias education module called Understanding Implicit Bias (UIB). The program was recently covered in an article in Charlottesville's Daily Progress newspaper, as well as in the UVA student newspaper, The Cavalier Daily. Click here to read more

In the workplace, how might a supervisor's biases relate to employee performance? This question was the subject of a paper by economists Dylan Glover, Amanda Pallais, and William Pariente at the Quarterly Journal of Economics. Click here to read more

Our previous blog post looked at some interesting maps showing differences in country or state averages in implicit racial attitudes. This post will delve a little deeper into that issue and review research looking at what forces may create such geographical variation.
Click here to read more

How do countries or states vary in their implicit racial attitudes? More than 10 years of data collection on Project Implicit (freely available here) provides a healthy amount of participants from across the world, particularly for the site's most popular test, which assesses implicit race attitudes. Recently, researchers have compiled maps of state and country-level averages of implicit racial attitudes.
Click here to read more

September 4, 2017: Is There an Alliteration Effect on the IAT?

Researchers using the IAT often worry about what category labels to use. A common concern is that, when choosing between similar category labels, even subtle differences between labels can alter IAT performance. One example comes from IATs looking to assess gender-career associations, meaning how strongly the concepts of male and female are associated with the concepts of career and family. In this IAT, participants categorize typically male or female names as well as words related to family or career. Results typically show stronger associations between male with career and female with family.
Click here to read more

How do you best measure self-reported attitudes on socially sensitive topics? For instance, how much faith would you have in responses to a question asking whether someone wanted to have Black neighbors? Some people might think that such an item would create 'socially desirable responding', meaning that people would report a socially acceptable response even if they felt otherwise.
Click here to read more

How can implicit and explicit racial attitudes be used to understand important life events? What role may implicit and explicit racial bias play in understanding health outcomes for minorities? Researchers Jordan Leitner, Eric Hehman, Ozlem Ayduk and Rodolfo Mendoza-Denton present one investigation of such issues in a recent paper published in Social Science and Medicine.
Click here to read more